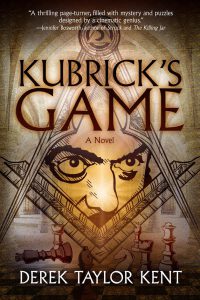 Derek Taylor Kent contacted me by email to read and review a copy of his book. I would like to thank him for his interest in my review and the chance to read his book.

Shawn Hagan, a college film student obsessed with legendary filmmaker Stanley Kubrick, discovers hidden clues in his movies which lead him on a harrowing quest toward a mysterious treasure that Kubrick left behind. Endangered by sinister groups on the same quest, Shawn has no choice but to claim the prize first because in the wrong hands … “It has the power to change the course of history.”

This book was VERY well thought out. You can tell that a lot of time and effort were put into the puzzle in this book. If you like a mystery with a ton of adventure you will really enjoy this book. It is a mind-bender. It gets you thinking and trying to solve the clues right along with the characters. It seems so real, and like it’s actually a fictional book based on fact. That may be part to the cool illustrations throughout the book.

There is a bit of romance thrown in between several of the characters but not much. It doesn’t overpower the story. The story concentrates more on the puzzle and mystery of the films. This also might be why for me I would lose a bit of interest while reading. The details in the films and puzzle were thought out so meticulously that from time to time I would feel myself growing a little bored from all the detail.

I couldn’t really connect that well with all of  the characters. I felt like I didn’t know most of them very well. The author did a great job of making me feel like I knew Shawn and his life. Unfortunately, I didn’t get to know too much about the other characters and that kind of left me feeling disconnected from them. I was missing feeling and depth from these characters.  I was missing those little personality quirks that makes a character special, and makes me feel connected.

Some of the puzzles in this story were a little too complex for me. These had to be some very brilliant film students to solve clues like this. I couldn’t wrap my mind around some of the clues. If you are into mind-bending puzzles of a high caliber than this is definitely a book you will enjoy.

I have to say that I am not much of a Stanley Kubrick fan but if you happen to have watched and enjoyed all ( or most ) of his films, or even if you are just a huge movie buff, than you will really enjoy this book. If you like puzzles, adventure, danger, and conspiracy theories then this book is also for you.

I absolutely adored the ending. It is one of those books that ends just the way I like it. Also, LOVED the surprise from the author at the end of this book. A brilliant idea.

Overall, I did enjoy reading this book for the most part. I thought the concept of the book was absolutely brilliant. I just wish that I could have felt more of a connection with these characters. If this author was to write another scavenger hunt type of adventure novel about a Steven Spielberg films or another film maker who I adore I would definitely read it. 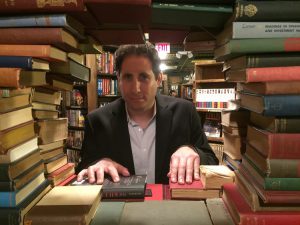 Derek Taylor Kent is an author, screenwriter, performer and director based in Los Angeles. His award-winning book series SCARY SCHOOL (written under pen-name Derek the Ghost) has become one of the most popular new series for middle-readers ages 7 to 12. His new bi-lingual picture book EL PERRO CON SOMBRERO came out August 18, 2015 through Holt/Macmillan and was a #1 best-selling new release.