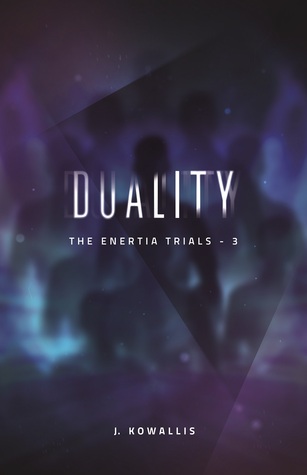 Reggie’s visions turn to horrifying hallucinations. For weeks she’s tortured with starvation and nightmares that vex her resolve. Her only companion is a mysterious shadow—a figure with no shape, no substance—that seems to have a mind of its own. It’s a presence that prickles her memories and plants a feeling of familiar dread in her mind.
Where she is, she doesn’t know, and the organization delving into her mind is more threatening than ever before.

With the help of shady contacts from his past, Nate struggles to travel half way around the world, facing his own demons and dreadful revelations. But when a stranger joins the team, the duality of this newcomer’s actions sets everyone on edge, leading them through a trial one of them . . . will not survive. (Synopsis from Goodreads)

Wow! What a shocking ending! I definitely didn’t see that coming at all.

J. Kowallis has done it again. Another gripping read that will have you holding on tight and not able to let go until the very end. This third book in the series did not disappoint at all. It was intense, thrilling, fast-paced, and action packed.

The writing was superb- as are all her books. It was descriptive in a way that was creative and made the story come alive. It made me feel as if I had stepped into this dystopian world. It all felt so real. This book really got into my head that by the time I went to sleep at night I was having vivid dreams that stemmed from the ideas in this book.

The chapters were the perfect length and I enjoyed reading the multiple points of view. It kept the story interesting and helped me grow close to these characters.

The characters become a lot more developed and I felt like I got  to know them on an even deeper level than I already had. Little personality quirks come out and made them seem more personal. None of these characters held back. They were not messing around. They were determinded in their endeavors. Strong and fearless.

I felt like this book was the beginning of even more exciting moments to come. I can’t WAIT for the final installment in this series! Waiting is going to be so difficult. This has quickly turned into one of my favorite new series. Definitely worthy of a re-read to experience the excitement all over again.

One of the BEST dystopian series ever written! You will be begging for more.

I would love to hear if you have read this series or are planning on reading it. Let’s banter in the comments below. –Michelle

J. Kowallis, the only girl of four children, grew up in northern Utah with a head full of wild stories (most often unreal). At the age of 9, she wrote her first poem, a dedication to E.B. White’s Charlotte’s Web. It was so intriguing, her third grade teacher requested to keep the original. Between living in various fictional worlds, and spending time on her studies, she managed to graduate from Weber State University’s creative writing program. She now lives in Utah with her Mini Schnauzer, Etta, and spends most of her time still bouncing between this world and the fantastical while enjoying delectable über-dark chocolate and lavender baths. She enjoys dreaming about, flying to, and writing about distant lands (real or unreal).