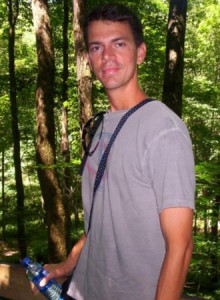 Joel Lawrence is the author of the debut novel Tears of Time ( Atlantis Reborn, #1). This book will be releasing later this year in September. It will be published by oftomes publishing.

Cal State freshman Eden Ellis feels like a stranger in time, and her dreams are growing more dangerous each night. Is she really the reincarnation of a Bronze Age princess, or is that just the medication talking?

Eden’s new telekinetic powers feel real enough, the same abilities used to wage an apocalyptic war in the dream world, where an ancient kingdom struggles to survive the wrath of a fallen priest. When Eden’s friends start having similar nightmares and developing powers of their own, she realizes one of them may be the reborn soul of the villain from the dreams who nearly shattered the world—a madman, a traitor, and the lover of Eden’s past self.

When a government experiment using the same powers that started the ancient war goes disastrously wrong, Eden’s dreams hold the key to saving the future—if she can accept her dual identity and defeat the reincarnation of the man she used to love.

Tell us a little bit about yourself, where are you from?

Joel: I’ve lived in several places and traveled North America, but my home will always be small town Minnesota. Unlike a lot of writers, I come from more of a programming/game design background, but all of that still uses the same creative muscles as writing I think. As far as personal life, I’m kind of a natural introvert who has become more social over the years and now I try to see and do as much as possible.

Do you have any pets?

Joel: No pets currently, but I love cats and dogs and turtles and lovebirds in particular, and get to interact with them frequently when hanging with family and friends. One day I will adopt a turtle and name him Donatello.

Where did you get your idea for Tears of Time?

Joel: Tears of Time evolved from a number of inspirations, particularly anime, Final Fantasy, Atlantis mythology, and superhero stories like the Heroes TV show. I’d only written traditional fantasy before starting this project, and wanted to come up with a contemporary story idea where I could still use some of that fantasy writing experience, but create something more mainstream and marketable.

That’s where the two worlds idea sprang from- hey, I can have a fantasy story going on underneath, and eventually kind of blend with the contemporary aspects. I didn’t want to use portals or traditional time travel to achieve this, so the reincarnation idea surfaced one day, and Atlantis as the historical/mythological fantasy setting, and everything came together, and by the time I started writing, it felt natural and kind of just like it’s own thing, where I never thought about genre until I started writing query letters.

Who or what inspired you to write?

Joel: I’ve always been extremely creative. My strengths are in writing and liberal arts and artistic endeavors more so than math and science (though I’m a big fan of science), so gravitating toward the creative fields came naturally. Lord of the Rings was the first book I loved and reread several times, and the depth and world building woven into the Wheel of Time series and Harry Potter got me thinking more seriously about attempting my own full length novel one day.

What do you hope to accomplish as a published author?

Joel: To find a lasting audience, and develop enough name recognition and credibility with my readers to know my novels will always be published in some form from here on out.

What do you consider to be your biggest challenge as a writer?

Joel: Not editing as I go. I’ve had to break the bad habit of going back and editing while writing first drafts. I think it’s fine to go back to a scene for consistency reasons, even during a first draft, and wondering, ‘hey what happened again back in chapter three?’ and making sure the new scene matches up, but it’s tempting for me to start editing and revisiting dialog and descriptions anytime I look at my writing, and the early draft is not the time to do this.

When you are not writing what do you enjoy doing in your free time?

Joel: When not writing (or reading, which I do a lot), I like to be outdoors and active. I like being on the water, swimming, kayaking. I still like to dabble in game design, though I don’t play nearly as many games as I used to, ironically.

As a child, what did you want to do when you grow up?

Joel: I wanted to design games. Like I said, I’ve always been stronger in creative endeavors. I did want to be a writer briefly, so the idea sort of stayed in my head for years and eventually resurfaced.

Who are some of your favorite authors? Favorite book?

Joel: For fantasy, I like Tolkien and Rowling and Sanderson and George RR Martin. For YA, I am a big fan of Jennifer Armentrout, Victoria Aveyard, Melissa Landers, and again Brandon Sanderson for his Reckoners series. My favorite all time book is Contact, by Carl Sagan. But that’s only if I’m forced to pick one, because in reality I think a top five or ten favorites reflect people’s various tastes and moods more than one single pick.

Is there anything you would like your readers to know about Tears of Time? 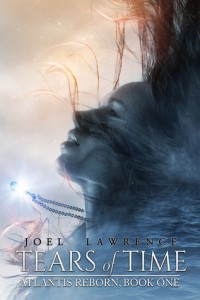 Joel: Tears of Time, releasing in September 2016, is a fun adventure fantasy with romance, mystery, some awesome magical duels, and a lot of depth and back story underneath the surface. It’s the first book in an intended trilogy, though it’s somewhat stand-alone. Tears of Time blends a lot of fantasy genres together, not by design, but just by the nature of the creative process, and that’s probably some of the anime influence coming through, but it’s distinctly American, distinctly western, so I hope readers will enjoy what I feel is a nice mix of the unique and the familiar. The cover reveal is March 1st, and I’ll be posting more info and media on the book on my website and social media links which can be found at www.joellawrence.com/contact

A huge thank you to oftomes publishing for giving me the opportunity to interview Joel, and a huge thank you to Joel  for taking the time out to answer my questions! I look forward to reading your book and wish you much success!

Leave a comment or question for Joel below. He would love to hear from you! 🙂

Want to know more about Joel? Click the links below:

Click the links below for more about oftomes publishing: