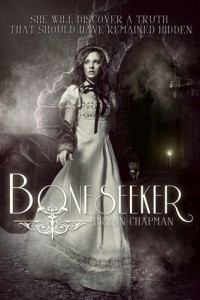 Arabella Holmes was born different and raised different. After it became apparent she wouldn’t fit the role of a proper 1900’s lady, her father, Sherlock, called in some lingering favors, and landed her a position at the Mutter Museum. The museum was Arabella’s dream; she was to become a purveyor of abnormal science. What her father called a BoneSeeker.

Henry Watson arrives at the Mutter Museum with a double assignment–to become a finder of abnormal antiquities and to watch over and keep Arabella Holmes. An easy task, if he could only get her to speak to him instead of throwing knives in his general direction.

But this is no time for child’s play. The two teens are assigned to a most secret exploration, when the hand of a Nephilim is unearthed in upstate New York. Soon, Arabella and Henry are caught in a fight for their lives as scientific debate swirls around them. Are the bones from a Neanderthal … or are they living proof of fallen angels, who supposedly mated with humans according to ancient scrolls?

Sent to recover the skeleton, they discover they are the second team to have been deployed and the entire first team is dead. And now they must trust their instincts and rely on one another in order to survive and uncover the truth.

When I first heard of this book I was very excited to read it! Who doesn’t love a good mystery story? It had an intriguing premise involving the daughter of Sherlock Holmes and the son of Watson! Even more interesting was that this story takes place at the Mutter Museum in Philadelphia. Nothing like reading a story that takes place near where you are from and with familiar places. I thought this book was going to be very captivating and I was in mood for an interesting mystery story. Unfortunately I didn’t get exactly what I had hoped for.

The whole idea for the story and the mystery building up in the book was very interesting. The things found in the Mutter Museum are very unique and interesting indeed. It was a fun read. I did get a bit of a dark and dreary feel from the book which set the mood and background for the story. The characters were easy to differentiate from each other but I just couldn’t feel a connection with them.

Maybe I just expected too much from this story, I don’t know. It just wasn’t all that I had hoped it would be. The whole thing just fell pretty flat for me. It couldn’t keep my interest and I felt my mind wandering during parts of the story. I wanted there to be a element of mystery for me but it wound up being easily predictable for me. You learn  right away in the story who the villain is. I hoped for a bit more chemistry between Arabella and Henry.  I had really hoped for so much more with this book. I just didn’t get any of what I expected so I was left feeling disappointed and wanting more. Sherlock’s shoes area big shoe’s to fill and I just don’t feel that Arabella did that.

This read was just an alright read for me. It was good enough that I didn’t put it down and mark it DNF (did not finish) but it wasn’t good enough for me to want to keep reading without putting it down. If the adventures of Arabella and Henry were to continue I would give it another try in hopes that the next adventure would be a little more mysterious, the romance between Arabella and Henry would bloom, and maybe have the chance to connect with the characters more. This was a fantastic idea for a book and a clever premise. I hope that the author will keep it going and maybe give it a little more mystery. 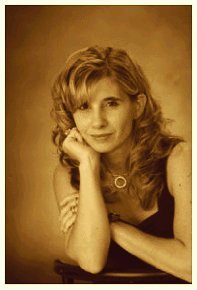 Born and raised in western Pennsylvania, Brynn Chapman is the daughter of two teachers. Her writing reflects her passions: science, history and love—not necessarily in that order. In real life, the geek gene runs strong in her family, as does the Asperger’s syndrome. Her writing reflects her experience as a pediatric therapist and her interactions with society’s downtrodden. In fiction, she’s a strong believer in underdogs and happily-ever-afters. She also writes non-fiction and lectures on the subjects of autism and sensory integration and is a medical contributor to online journal The Age of Autism.

She also writes under the pseudonym R.R. Smyth