Fire In The Woods by Jennifer M. Eaton

Fire In The Woods by Jennifer M. Eaton 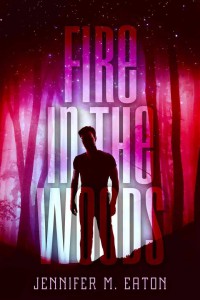 When a plane crashes in the woods near Jess’s home, the boy of her dreams falls out of the sky.

David’s not here to find a girlfriend. He’s from another planet, and if Jess can’t help him get back to his ship, he’ll be stuck on Earth with nothing to look forward to but the pointy end of a dissection scalpel. But her father runs their house like an army barracks. and with an alien on the loose, Major Dad isn’t too keen on the idea of Jess going anywhere. Ever.

So how the heck is she supposed to help the sweetest, strangest, and cutest guy she’s ever met? Hiding him in her room probably isn’t the best idea. Especially since her Dad is in charge of the squadron searching for David. That doesn’t mean she won’t do it. It just means she can’t get caught. Helping David get home while protecting her heart—that’s gonna be the hard part. After all, she can’t really fall for a guy whose not exactly from here.

As they race through the woods with Major Dad and most of the U.S. military one breath behind them, Jess and David grow closer than either of them anticipated. But all is not what it seems. David has a genocide-sized secret, and one betrayal later, they are both in handcuffs as alien warships are positioning themselves around the globe. Time is ticking down to Armageddon, and Jess must think fast if she’s to save the boy she cares about without sacrificing Earth—and everyone on it. Will the world end or will David save the day?

This book was so much fun to read! I sped through it so quickly. It is an easy read. Jess and David are adorable. If you are a fan of the show Roswell you will fall in love with this book! The characters were easy to fall in love with. I enjoyed every second of reading this book. There was plenty of adventure, love, thrills, and action. This book had originality and creativity. I loved the name of the alien race and that they had their own language. Everything flowed so well and I was never bored while reading this book. My only complaint was that it ended so soon. I wanted more.

The main character Jess is a pretty tough chic who stands up for what she believes in. She is on a mission and she is not going to stop until she completes it. David was an interesting character as well and had a very unique way of showing affection.

If you love aliens as much as I do then you don’t want to miss this book. The second novel Ashes In The Sky was just recently released this month. Get both so you don’t have to wait like I do. I wish I would have picked up the second one as soon as it came out. I wanted to continue reading as soon as this book ended. I am highly anticipating reading the next one. In hope that there will be a third as well!

If you are looking for a fun and exciting new YA alien series to read then pick this one up. The adventure is just getting started. I expect that it is only going to get better.