Fear My Mortality by Everly Frost

In a world where people are invulnerable to illness and death, with lives spanning hundreds of years, a sixteen-year-old becomes witness to the impossible – her brother’s failure to regenerate after death after which she suspects that she too may be mortal.

Wow! This YA fantasy/science-fiction novel was a huge thrill ride! I loved the originality of this story. I was kept on the edge of my seat with every turn of the page. This book was never dull or boring. There was so much going on that will keep your mouth hanging open in shock! There are plenty of jaw-dropping moments in this book. This book is a thrill ride from beginning to end.

Warning: There is some violence and those with a weak stomach may not be able to read this book. ( You will be missing out. )

The story starts out in a way that will have you in shock. Ava the main character in the book witnesses a young child hit by a car. The person who hit the kid gets out of the car and looks annoyed and inconvenienced. The Mother of the child is also there and also looks annoyed and inconvenienced. No one is sad that a kid is lying there un-moving. WHAT?! There is a small camera flying around taking pictures of it all and gets in Ava’s face. This was so strange, absurd, and intriguing. I was in shock over the people with no feelings and had to know what in the world was going on. I stayed up way beyond my bedtime to read this one. Make sure you have enough free time on your hands for this book. Once you pick it up you will not want to put it down.

Ava is a  kick-ass female! One of the strongest female characters in a YA novel I have seen in a while. She took beating after beating and just kept on going. She never gave up. She is one strong mortal!

The writing was easy to follow and flowed well. This is a great escape novel. The world around you will melt away and you will feel like you are inside the story.

I can’t wait to see where the story goes from here. I am highly anticipating the next novel.

There was once thing that I found strange. Ava’s parents leave her and then you never find out where they went or what happened to them  in the rest of the story. The parents are never brought up again. I am hoping that there is a reason for this. Maybe the next book will be a huge conspiracy focused on her parents. Guess we will have to wait and see.

*I received an e Galley of this book from the publisher in return for and honest review. 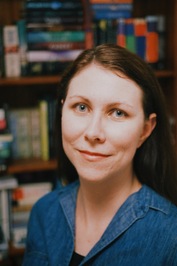 Everly Frost wrote her first story when she was nine. She grew up in a country town, lived for a little while in Japan, and worked for several years in Canberra, Australia’s capital city. Now, Everly lives in Brisbane, Australia, with her husband and two children. She doesn’t speak Japanese so often anymore, has left the cold Canberra winters behind, but has never stopped writing.