“Are you happy with your life?” Those are the last words Jason Dessen hears before the masked abductor knocks him unconscious. Before he awakens to find himself strapped to a gurney, surrounded by strangers in hazmat suits. Before a man Jason’s never met smiles down at him and says, “Welcome back, my friend.”

In this world he’s woken up to, Jason’s life is not the one he knows. His wife is not his wife. His son was never born. And Jason is not an ordinary college physics professor but a celebrated genius who has achieved something remarkable–something impossible.

Is it this world or the other that’s the dream? And even if the home he remembers is real, how can Jason possibly make it back to the family he loves? The answers lie in a journey more wondrous and horrifying than anything he could’ve imagined—one that will force him to confront the darkest parts of himself even as he battles a terrifying, seemingly unbeatable foe.

A masterpiece! A fictional piece of art!  It made me contemplate and look at things from a different perspective. It really made the wheels in my mind turn.  This book took me on a thrill ride from beginning to end. The entire book was non-stop action. There was never a dull or boring moment. It captivated me and sucked me in.  I didn’t want to put this book down for one second. This was by far one of my favorite reads of the year so far, if not the BEST read of the year.

Jason-the main character- was strong, determined, and clever. He was the kind of man I would want for a Husband ( if I wasn’t already married). He loved his family so much that he was willing to do whatever it took to keep them safe, even if it meant sacrificing his own life. All of the characters were realistically drawn and made me  feel like I knew them personally. The love and connection between Jason and Daniella was beautiful. It is the kind of love from a man every woman dreams of. I could completely relate to Daniella in the end of the story. I would have had the same feelings and thoughts she did.

This story was at times creepy and harrowing in the best possible way. It is one of those books that gets under your skin and makes you contemplate. It makes you think about the choices you  make through life and who or where you would be if you had made a different decision at a particular time in your life.   Did I make the right decisions in my life? Could I be living a better, more wealthy life right now? Would I be with someone else? Live in a different place? This piece of fiction felt like something that could happen in the future. It was believable, at least for me. It also made you look at what you do have in life and be happy and thankful for it. Towards the end of the book it started showing how fate plays into things. It made me think of how we are all where we are meant to be or need to be.

This book was written in a way that was easy to follow. The sentences were short and sweet. The writing was never drawn out or dragged on.  The descriptive writing was never overdone. I could see the book playing out like a movie screen in my mind. Speaking of movies, there is a big possibility that this is going to be one! :-0 So extremely excited for this!!!

This author’s work and writing style  reminded me of Harlan Coben, one of my all-time favorite authors. I would put this writing right up there with James Patterson, Joe Hill, Dean Koontz, and Stephen King. If you are a fan of any of those authors then you will definitely enjoy this book! 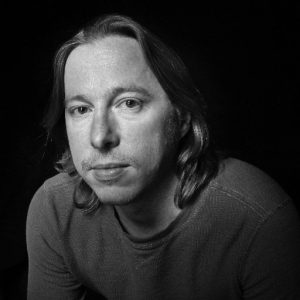 Blake Crouch is a bestselling novelist and screenwriter. He is the author of the forthcoming novel, Dark Matter, for which he is writing the screenplay for Sony Pictures. His international-bestselling Wayward Pines trilogy was adapted into a television series for FOX, executive produced by M. Night Shyamalan, that was Summer 2015’s #1 show. With Chad Hodge, Crouch also created Good Behavior, the TNT television show starring Michelle Dockery based on his Letty Dobesh novellas. He has written more than a dozen novels that have been translated into over thirty languages and his short fiction has appeared in numerous publications including Ellery Queen and Alfred Hitchcock Mystery Magazine. Crouch lives in Colorado with his family.

Let’s banter. I am dying to discuss this book with someone. Let me know in the comments below if you have read it and what your thoughts are. 🙂